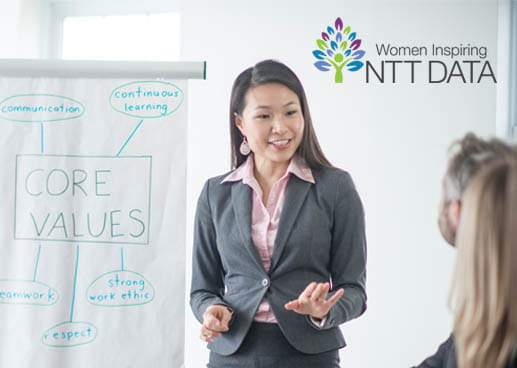 I’m energized about celebrating the 107th annual International Women’s Day this week. It’s exciting, because women have made significant progress in the past century. For example, advancements in the U.S. include women’s rights to vote (1922), get a credit card (1974) and not be fired from their job for being pregnant (1978). But this year’s celebration is also challenging, because the World Economic Forum’s 2017 Global Gender Gap Report states it will take more than 200 years to close the global economic gender gap, based on current trends.

That’s exactly why we have to #PressforProgress and accelerate gender parity. It’s not just a moral imperative, although it is the right and fair thing to do. Gender parity, especially increasing the participation of women in the workforce, is an economic imperative:

One area we’re focusing on at NTT DATA Services is “unconscious bias,” defined by UC San Francisco’s Office of Diversity and Outreach as “social stereotypes about certain groups of people that individuals form outside their own conscious awareness,” noting that it’s “far more prevalent than conscious prejudice and often incompatible with one’s conscious values.” We’re focused on this because it’s difficult to create change without being aware of what prevents it. Awareness of unconscious bias is a step towards fostering diversity and achieving our goal of inclusion.

Increasing inclusion is critical for the technology industry, one of the fields women are leaving at much higher rates than men. Obstacles and disincentives for women in technology include lack of mentors, lack of female role models, gender bias in the workplace, unequal growth opportunities and unequal pay for the same skills. (Source: ISACA)

At a recent client meeting, Tim Conway, the president of our Public Sector business, spoke passionately about the need to encourage and support women who pursue STEM education and careers. Tim is one of many executives in our industry who are genuinely concerned about the declining numbers of women in technology and who are working with us to reverse that trend.

I feel fortunate to work at a company that recognizes it must do more and is committed to doing more. In fact, NTT DATA’s President and CEO Toshio Iwamoto issued a statement about International Women’s Day and said, “Inclusion is one of NTT DATA’s corporate priorities.” As part of our effort to effect positive change, NTT DATA supports an employee-led group known as “Women Inspiring NTT DATA” (WIN). Chapters across North and South America, Europe and Asia include women and men who are passionate about women’s initiatives, and supporting and developing women and their leadership capabilities. WIN serves as a resource to our employees by providing opportunities to nurture personal and professional development, support recruitment and retention of highly talented women, and promote and support diversity and inclusion initiatives that recognize and respect the individuality of all NTT DATA employees.

The rest of this week on this blog page, you’ll be hearing from some of these women who inspire NTT DATA. I’m honored to call them colleagues and friends, and I hope you enjoy their stories.

Mona Charif is chief marketing officer for NTT DATA Services. She leads marketing, communications, and corporate social responsibility, and is executive sponsor of the Women Inspire NTT DATA (WIN) employee resource group. Mona has more than 20 years of success in supporting brand awareness and growth objectives of Fortune 100 companies including Dell, Hewlett-Packard, Lucent Technologies and EDS. She holds a Master of Business Administration from the Naveen Jindal School of Management at the University of Texas-Dallas and a Bachelor of Journalism from the University of Texas-Austin.