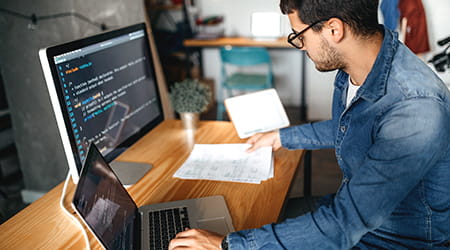 According to DZone news, “Forrester recommends test automation rates of over 80% to meet the demands of two-week Agile sprints. However, only 12% of surveyed reference clients achieved that level of test automation.” While this gap may seem insurmountable, in today’s article we’ll share several approaches to boost the amount of automated testing you’re doing, and how to focus where it counts most.

At Flux7, we created a templatized framework to create Ansible roles with testing built-in using Molecule. Molecule allows us to create different scenarios for different test cases, with which we can test Ansible roles against various platforms. Taking the solution one step further, we created standard templates for reuse with Cookiecutter. With our Molecule Framework for testing Ansible roles, we improve the quality of our Ansible roles using best practices, while ensuring integration with the CI/CD process. We’ve implemented this automated testing solution for several customers — one of which adopted it almost immediately across its teams in the US and Europe.

Flux7’s ECS Container Accelerator is a solution to simplify and speed up the cloud journey with a ready-to-deploy reference infrastructure, pipeline and sample container apps which implement common enterprise best practices. As part of the solution, an application pipeline is deployed to consistently build, test and promote an application from the lower to higher environments. Using Artillery.io, a load and functional testing solution that helps teams ship scalable backends, APIs and services, we stress test the applications. Performance testing is built in to the application pipeline using the artillery.io testing framework to ensure code promoted to production can scale.

James Wade points out that, “testing as code is not so much about automated testing, but test automation,” a motto we incorporate into our test automation solutions for customers. For, in addition to streamlining processes and growing consistency, test automation can help reduce downtime and reduce errors or failures for end users — both of which can result in revenue impacting customer issues. Test automation decreases time to market by enabling teams to produce higher quality code, faster, and importantly, frees teams to focus on strategic work that has greater impact on the business.

Are you ready to begin experiencing these benefits, but need help identifying where to begin?