Hockey Sticks and Baseball Bats: What Health Plans Need to Know About Automation 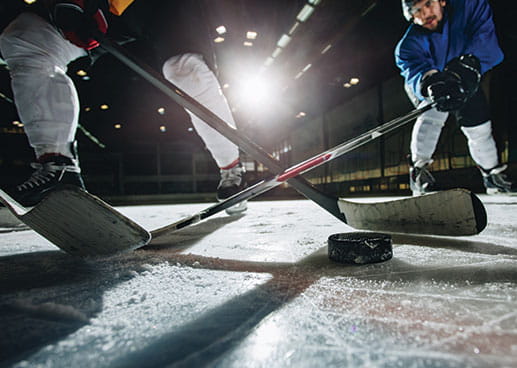 I don’t know anything about hockey (except the shape of the stick).

I do, however, know quite a bit about health plan platform implementations and system enhancements (and their often slow, sometimes painful, timelines.) I also know a lot about Intelligent Automation.

You are probably wondering at this point what hockey has to do with health plan IT platforms and automation. Let me explain.

Let’s say you have a team made up of colleagues from IT, Operations, Project Management and Business Analysis. You’re all working hard to find, procure, configure and deploy a claims system that acts like a Wizard. It will help you participate in Value Based Care models, improve member engagement, improve provider relationships, even improve member health. Working extra-hard, your Wizard will be ready to go to work in about 5 years. It’ll be magical. The moment the Wizard waves that magic wand, POOF, everything the business ever wanted in terms of an IT platform – quality, productivity, functionality, configurability – it’s all there. FIVE YEARS FROM NOW. If you graph the progress realized from platform implementation, the line would look rather like this hockey stick: 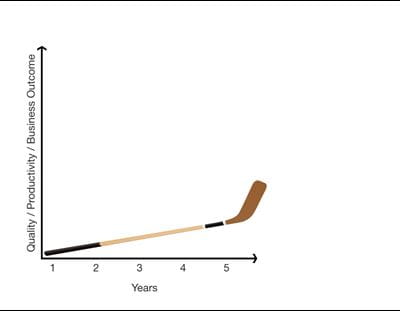 You’ll notice that over five years, the team greatly improves the business, but it is years before those improvements pay off.

Now let’s imagine a second team, also made up of colleagues from IT, Operations, Project Management and Business Analysis. That team is building automation capabilities – Robotic Desktop Automation, Robotic Process Automation, Virtual Agents, even old school macros and scripts. Their work goes much faster than the first team’s work, with some of the tools spun up in a matter of days! It’s like a Genie jumps out of the bottle and grants the business its wishes right away. The team keeps working hard, fulfilling wish after wish after wish, for a couple years, until they reach a plateau. A graph of their progress looks a little like this hockey stick: 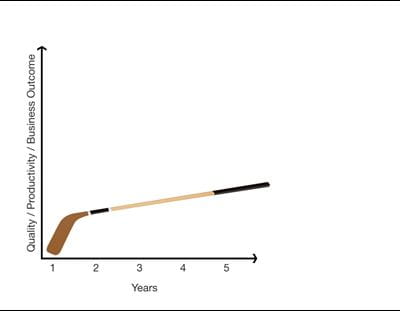 As you can see, the automation work pays off a lot in the beginning, but progress slows after the initial surge, held back by the outmoded platform.

The Genie offers fast results but can’t offer the long-term success that the Wizard offers.

I’m not a hockey fan, as I mentioned, but hockey sticks elegantly illustrate the benefits of implementing a new system (long-term success) or implementing automation (quick wins).

But wouldn’t you rather have both long-term success and quick wins?

Instead of two hockey sticks, you need one baseball bat.

Now let’s talk about baseball bats. I do like baseball (and health plan operations that drive better health in our communities), and a baseball bat is perfect for illustrating the progress you can make if the two teams work together. The automation team will get you the quick wins you want, accelerating improvements in quality and productivity, and the work on automation will increase the capabilities of the new platform the other team is building.

Here’s how it works:

The new platform arrives, with fewer gaps and with much of the processes automated from the outset. The robots go back to the dugout. When a new season of business demands create the need for more players on the field, your robots will be ready and waiting. With this approach, your progress looks like a baseball bat:

With your two teams working together, you get the Genie that fulfills wishes in an instant AND the Wizard who enables your long-term success.

Sports metaphors and magical helpers aside, the bottom line is that you don’t have to wait to do automation until you have your new platform in place. Work on both as a team and you’ll get better performance right now and better chances at a healthy future for your organization and for your members. 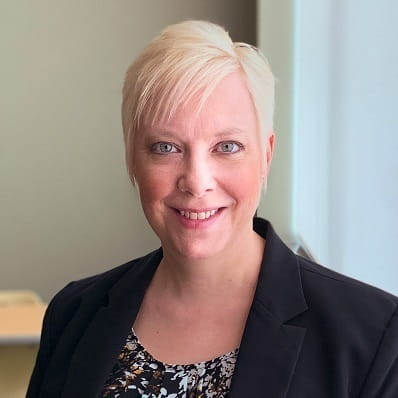 Deana is a mother to two intelligent young girls and brings Data Intelligence and Automation solutions to healthcare customers at NTT DATA — in that order. She also believes that NTT DATA has the best approach to scaling Intelligent Automation programs for health plans by creating a self-funding sustainable enterprise capability underpinned by a solid governance foundation. This obsession began when she designed the ikaMedicareGateway — the first in the industry to automate reconciliation of the CMS membership files. She has been a Compliance Administrator at UPMC Health Plan. Deana has a BS and MBA from Indiana University of Pennsylvania and lives within minutes of the Punxsutawney Phil museum in Pennsylvania.