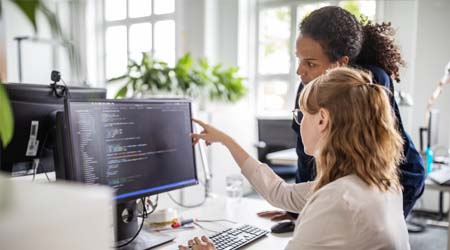 Docker, the new trending containerization technique, is winning hearts with its lightweight, portable, “build once, configure once and run anywhere” functionalities. This is part one of Flux7’s Docker tutorial series. As we move forward, together, we will learn and evaluate how Docker makes a difference, and how it can be put to the best use.  Let’s learn Docker and nail it in less than six to seven weeks.

This part deals with the basics of Docker: its features, concepts and installation to get you onboarded with Docker.

Docker offers quite a number of interesting features which you will better understand as we maneuver through the tutorial series. However, a short list of docker features include:

Docker has three components and three basic elements. Check out this video to get a quick grasp of the Docker components and elements, and their relation to one another.

Docker Client is the user interface that allows communication between the user and the Docker daemon.

Docker Containers are responsible for the actual running of applications and includes the operating system, user added files, and meta-data. 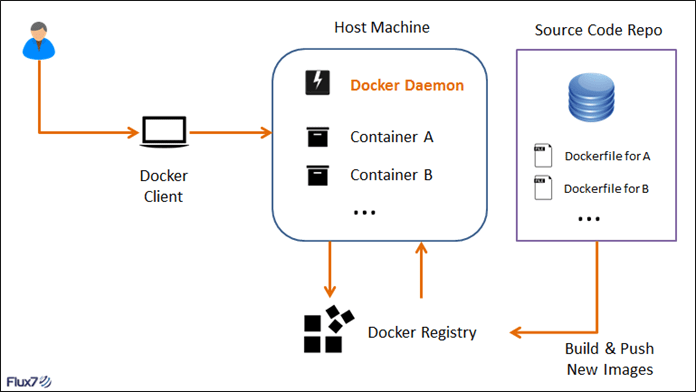 Before discussing how Docker components and elements interact, let’s talk about what constitutes the pillars of Docker.
Docker uses the following operating system features for efficient containerization:

How the Puzzle Fits Together
To run any application, there is a basic requirement of two steps:

The initiation of these steps is fired using commands from the Docker Client. Docker Client is launched using the docker binary. At the basic level, Docker Client intimidates Docker Daemon regarding the image that needs to be created and the commands that need to be run inside the container. So after the signal to create an image is captured by the Daemon, these steps must be followed:

As mentioned before, Docker Image is a read-only template to build containers. An image holds all the information needed to bootstrap a container, including what processes to run and the configuration data. Every image starts from a base image, and a template is created by using the instructions that are stored in the DockerFile. For each instruction, a new layer is created on the image.

Once images are created, they can be pushed to the central registry, the Docker Index, and made available for use by others. However, the Docker Index provides two levels of access permissions to images: public and private. You can store images privately by using the private repositories, which is one of the pricing plans offered by Docker. Based on the number of private repositories needed, the cost ranges between $7 and $50 per month. In short, public repos are searchable and re-usable, whereas private repos are only accessible to the members who have permissions. Docker Client can be used to search for images in the Docker Index.

Running the container originates from the image we created in the previous step. When a container is launched, a read-write layer is added to the top of the image. After appropriate network and IP address allocation, the desired application can now be run inside the container.

If you are still a little confused, sit back, then watch for the practical examples we will be sharing with you during the coming weeks of this tutorial series.

A basic understanding suffices for now. So, let’s go ahead and install Docker!

Let’s discuss how to install Docker in Ubuntu 12.04 LTS, in what we believe to be as the stable version.

Step 1 – Check for https compatibility of the APT system.

Step 2 – Add the Docker Repository key to the local keychain.

Step 3 – Add the Docker Repository to the apt sources list.

Many Docker enthusiasts are evolving their container strategies to address microservices. Read more about Docker and microservices here.

Get Started with AWS

Receive AWS tips, DevOps best practices, news analysis, commentary and more. Sign up for our IT Modernization blog here and set your topic and frequency preferences. Or, download our guide on getting started with AWS, establishing a secure AWS enterprise architecture with Flux7 Landing Zones.